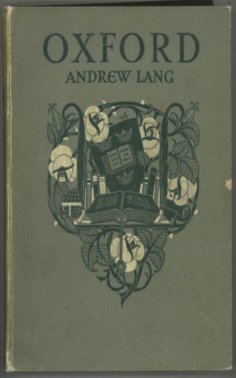 These papers do not profess even to sketch the outlines of a history of Oxford.They are merely records of the impressions made by this or that aspect of the life of the University as it has been in different ages.Oxford is not an easy place to design in black and white, with the pen or the etcher's needle.On a wild winter or late autumn day (such as Father Faber has made permanent in a beautiful poem) the sunshine fleets along the plain, revealing towers, and floods, and trees, in a gleam of watery light, and leaving them once more in shadow.The melancholy mist creeps over the city, the damp soaks into the heart of everything, and such suicidal weather ensues as has been described, once for all, by the author of John-a-Dreams.How different Oxford looks when the road to Cowley Marsh is dumb with dust, when the heat seems almost tropical, and by the drowsy banks of the Cherwell you might almost expect some shy southern water-beast to come crashing through the reeds!And such a day, again, is unlike the bright weather of late September, when all the gold and scarlet of Bagley Wood are concentrated in the leaves that cover the walls of Magdalen with an imperial vesture.

Our memories of Oxford, if we have long made her a Castle of Indolence, vary no less than do the shifting aspects of her scenery.Days of spring and of mere pleasure in existence have alternated with days of gloom and loneliness, of melancholy, of resignation.Our mental pictures of the place are tinged by many moods, as the landscape is beheld in shower and sunshine, in frost, and in the colourless drizzling weather.Oxford, that once seemed a pleasant porch and entrance into life, may become a dingy ante-room, where we kick our heels with other weary, waiting people.At last, if men linger there too late, Oxford grows a prison, and it is the final condition of the loiterer to take 'this for a hermitage.'It is well to leave the enchantress betimes, and to carry away few but kind recollections.