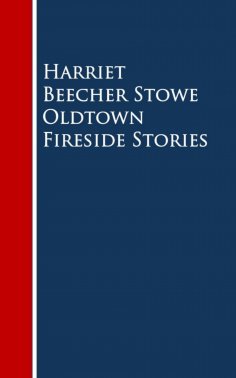 "Come, Sam, tell us a story," said I, as Harry and I crept to his knees, in the glow of the bright evening firelight; while Aunt Lois was busily rattling the tea-things, and grandmamma, at the other end of the fireplace, was quietly setting the heel of a blue-mixed yarn stocking.
In those days we had no magazines and daily papers, each reeling off a serial story. Once a week, "The Columbian Sentinel" came from Boston with its slender stock of news and editorial; but all the multiform devices—pictorial, narrative, and poetical—which keep the mind of the present generation ablaze with excitement, had not then even an existence. There was no theatre, no opera; there were in Oldtown no parties or balls, except, perhaps, the annual election, or Thanksgiving festival; and when winter came, and the sun went down at half-past four o'clock, and left the long, dark hours of evening to be provided for, the necessity of amusement became urgent. Hence, in those days, chimney-corner story-telling became an art and an accomplishment. Society then was full of traditions and narratives which had all the uncertain glow and shifting mystery of the firelit hearth upon them. They were told to sympathetic audiences, by the rising and falling light of the solemn embers, with the hearth-crickets filling up every pause. Then the aged told their stories to the young,—tales of early life; tales of war and adventure, of forest-days, of Indian captivities and escapes, of bears and wild-cats and panthers, of rattlesnakes, of witches and wizards, and strange and wonderful dreams and appearances and providences.