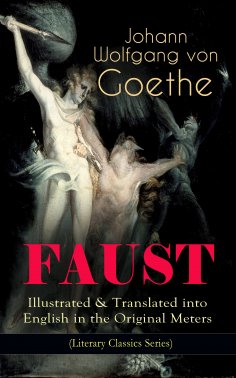 This carefully crafted ebook: "FAUST - Illustrated & Translated into English in the Original Meters (Literary Classics Series)" is formatted for your eReader with a functional and detailed table of contents.
Faust is Goethe's magnum opus and considered by many to be one of the greatest works of German literature. The story takes place in multiple settings, the first of which is heaven. Mephistopheles makes a bet with God – he says that he can lure God's favorite human being – Faust, who is striving to learn everything that can be known, away from righteous pursuits. Faust makes an arrangement with the devil – the devil will do everything that Faust wants while he is here on Earth, and in exchange Faust will serve the devil in Hell. In Faust, Goethe focuses on social phenomena such as psychology, history and politics, in addition to mystical and philosophical topics. Faust does not seek power through knowledge, but access to transcendent knowledge incomprehensible to the rational being. Here Goethe's mysticism asserts itself clearly.
Johann Wolfgang von Goethe (1749-1832) was a German writer and statesman, best known for his tragic play, Faust. His body of work includes epic and lyric poetry written in a variety of meters and styles, prose and verse dramas, memoirs, literary and aesthetic criticism, novels, numerous literary and scientific fragments and many more. A literary celebrity by the age of 25, Goethe was ennobled by the Duke of Saxe-Weimar, Karl August, following the success of his first novel, The Sorrows of Young Werther. He was also an early participant in the Sturm und Drang literary movement.