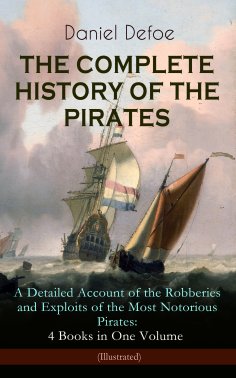 This carefully crafted ebook: "THE COMPLETE HISTORY OF THE PIRATES – A Detailed Account of the Robberies and Exploits of the Most Notorious Pirates: 4 Books in One Volume (Illustrated)" is formatted for your eReader with a functional and detailed table of contents.
A General History of the Pirates contains biographies of early 18th century pirates, which was influential in shaping popular conceptions of pirates. It is the prime source for the biographies of many well-known pirates and the author sticks close to the available sources.
The History of the Pirates is a sequel to A General History of the Pyrates and it is considered one of Defoe's most remarkable neglected works. In this volume Defoe records the exploits of pirates who lived a few decades earlier. The book has been hugely influential in shaping popular notions of piracy.
The King of Pirates is supposed to be an account of the pirate Henry Avery, known by contemporaries as "The Arch Pirate" and "The King of Pirates", and widely believed stories of Avery's pirate republic. Avery's account is presented in two long letters written by himself, one in Madagascar, and the other during the escape.
The Pirate Gow is an account of John Gow, a notorious pirate whose short career was immortalized by Defoe. Gow had a successful career as a pirate around the Iberian Peninsula, but he was captured and hanged in London. Gow also served as the model for Captain Cleveland in Sir Walter Scott's novel The Pirate.
Daniel Defoe (1660-1731), was an English writer, journalist, and spy, most famous for his novel Robinson Crusoe. Defoe is noted for being one of the earliest proponents of the novel, and he is considered one of the founders of the English novel.