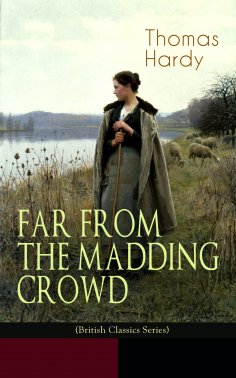 This carefully crafted ebook: “FAR FROM THE MADDING CROWD (British Classics Series)” is formatted for your eReader with a functional and detailed table of contents.
Far from the Madding Crowd tells the story of the farmer Bathsheba Everdene, her life and relationships - especially with her lonely neighbor William Boldwood, the faithful shepherd Gabriel Oak, and the thriftless soldier Sergeant Troy. It is the first of Hardy's novels to be set in a fictional county of Wessex in rural southwest England. The novel deals in themes of love, honor and betrayal, against a backdrop of the seemingly idyllic, but often harsh, realities of a farming community in Victorian England.
Thomas Hardy (1840-1928) was an English novelist and poet. A Victorian realist in the tradition of George Eliot, he was influenced both in his novels and in his poetry by Romanticism, especially William Wordsworth and Charles Dickens. Like Dickens, he was highly critical of much in Victorian society, though Hardy focused more on a declining rural society. While Hardy regarded himself primarily as a poet, initially he gained fame as the author of novels, including Far from the Madding Crowd, Tess of the d'Urbervilles and Jude the Obscure. Most of his fictional works were set in the semi-fictional region of Wessex. They explored tragic characters struggling against their passions and social circumstances.