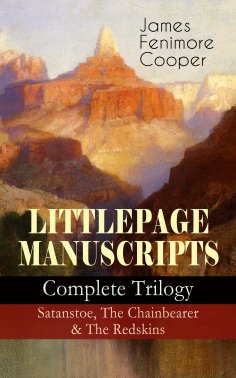 This carefully crafted ebook: "LITTLEPAGE MANUSCRIPTS – Complete Trilogy: Satanstoe, The Chainbearer & The Redskins" is formatted for your eReader with a functional and detailed table of contents.
The Littlepage Manuscripts follow three generations of a Dutch-originated family settling in America, beginning in the mid-eighteenth century. The trilogy is a fictional biography of the Littlepage family which explores the 18th century colony of New York. Novels focus mainly on issues of land ownership and the displacement of American Indians as the United States moves westward. Critical to the trilogy of these novels, is the sense of expansion through the measuring and acquisition of land by civilization. Narratives in these fictional manuscripts reveal a lot about the mentality of the people at that point in history.
Satanstoe is the first novel of the trilogy with Mr. Cornelius Littlepage as the main narrator. His writings and descriptions paint the idyllic picture of the life of Dutch colonists.
The Chainbearer is the second book in a trilogy, narrated by Mordaunt Littlepage. The title represents the man who carries the chains in measuring the land, helping civilization to grow from the wilderness. Here is described cultural lack of understanding Native Americans had for European concepts of land ownership.
The Redskins is the final part of the trilogy with Mr. Hugh Roger Littlepage as narrator. This book closes the series of the Littlepage Manuscripts, which have been given to the world as containing a fair account of the comparative sacrifices of time, money, and labor, made respectively by the landlord and the tenants, on a New York estate.
James Fenimore Cooper (1789-1851) was a prolific and popular American writer of the early 19th century. His historical romances of frontier and Indian life created a unique form of American literature. His best-known works are five historical novels of the frontier period known as the Leatherstocking Tales.