The Complete Works of Beatrix Potter: 22 Children's Books with 650+ Original Illustrations in One Vo 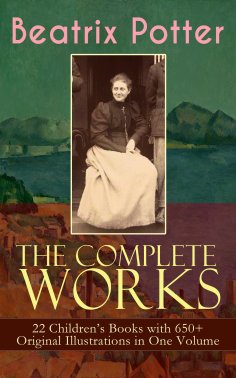 This carefully crafted ebook: "The Complete Works of Beatrix Potter: 22 Children's Books with 650+ Original Illustrations in One Volume" is formatted for your eReader with a functional and detailed table of contents:
The Tale of Peter Rabbit
The Tale of Squirrel Nutkin
The Tailor of Gloucester
The Tale of Benjamin Bunny
The Tale of Two Bad Mice
The Tale of Mrs. Tiggy-Winkle
The Tale of the Pie and the Patty-Pan
The Tale of Mr. Jeremy Fisher
The Story of a Fierce Bad Rabbit
The Story of Miss Moppet
The Tale of Tom Kitten
The Tale of Jemima Puddle-Duck
The Tale of Samuel Whiskers (The Roly-Poly Pudding)
The Tale of the Flopsy Bunnies
The Tale of Ginger and Pickles
The Tale of Mrs. Tittlemouse
The Tale of Timmy Tiptoes
The Tale of Mr. Tod
The Tale of Pigling Bland
Appley Dapply's Nursery Rhymes
The Tale of Johnny Town-Mouse
Cecily Parsley's Nursery Rhymes
Beatrix Potter (1866-1943) was an English author, illustrator, natural scientist, and conservationist best known for her children's books featuring animals. Potter's artistic and literary interests were deeply influenced by fairies, fairy tales and fantasy. Her best known picture book is The Tale of Peter Rabbit which was also her first publication. The great success was followed by the number of successful children's books about animals, such as The Tale of Squirrel Nutkin, The Tailor of Gloucester and The Tale of Benjamin Bunny. She carried on to write and illustrate until her diminishing eyesight made it difficult to continue. Potter's books continue to sell throughout the world in many languages with her stories being retold in song, film, ballet, and animation.