Dickson McCunn – The Complete Adventure Series in One Volume 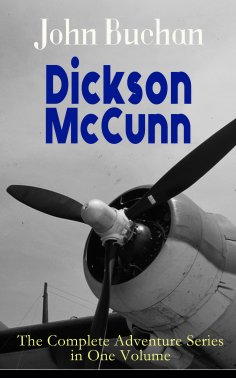 This carefully crafted ebook: "Dickson McCunn – The Complete Adventure Series in One Volume" is formatted for your eReader with a functional and detailed table of contents.
The hero of the adventure trilogy is an affluent grocer Dickson McCunn, who has sold his business and taken early retirement. As soon as he ventures out to explore the world, he is swept out of his bourgeois rut into bizarre and outlandish adventures, and forced to become a reluctant hero. He is formidable and dangerous partly because he seems unremarkable and ordinary, and friends and enemies alike are taken by surprise when he acts boldly.
Content:
Huntingtower: The story revolves around the imprisonment under false pretenses by Bolshevik agents of an exiled Russian noblewoman. The Scottish local community mobilises to uncover and thwart the conspiracy against her, and to defend the neutrality of Scotland against the Russian revolutionary struggle. A plot based on espionage and covert violence is set against the seemingly tranquil Scottish rural backdrop
Castle Gay: The Evallonians from a fictional Central European country visit south west Scotland on a secret mission. The Nail-Biting Suspense story about the mistaken identity, kidnapping plot and threatening Communists, all centering at the castle of a rich newspaper magnate...
The House of the Four Winds: The novel is set in the fictional Central European country of Evallonia in the early 1930s. It concerns the involvement of some Scottish visitors in the overthrow of a corrupt republic and the restoration of the monarchy...
John Buchan (1875-1940) was a Scottish novelist and historian and also served as Canada's Governor General. His 100 works include nearly thirty novels, seven collections of short stories and biographies. But, the most famous of his books were the adventure and spy thrillers and it is for these that he is now best remembered.