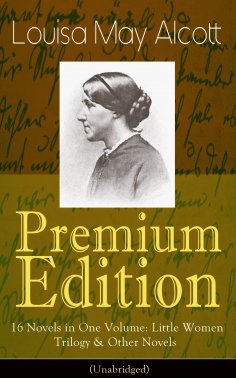 This carefully crafted ebook: "Louisa May Alcott Premium Edition - 16 Novels in One Volume: Little Women Trilogy & Other Novels (Illustrated)" is formatted for your eReader with a functional and detailed table of contents.
Content:
Biography
Louisa May Alcott: Her Life, Letters, and Journals
Novels
Little Women
Good Wives
Little Men
Jo's Boys
Moods
The Mysterious Key and What It Opened
An Old Fashioned Girl
Work: A Story of Experience
Eight Cousins; or, The Aunt-Hill
Rose in Bloom: A Sequel to Eight Cousins
Under the Lilacs
Jack and Jill: A Village Story
Behind a Mask, or a Woman's Power
The Abbot's Ghost, Or Maurice Treherne's Temptation
A Modern Mephistopheles
Pauline's Passion and Punishment
Louisa May Alcott (1832-1888) was an American novelist and poet best known as the author of the classic Little Women and its sequels Little Men and Jo's Boys. Alcott was an abolitionist and a feminist.
"Little Women" is a semi-autobiographical account of the author's childhood with her sisters in Concord, Massachusetts. "Good Wives" followed the March sisters into adulthood and marriage. "Little Men" detailed Jo's life at the Plumfield School that she founded with her husband Professor Bhaer. "Jo's Boys" completed the "March Family Saga".
"Work" uncovers the changes in women's work in the new industrial era, as well as the dilemmas, tensions, and the meaning of that work. The story depicts the struggles of a young woman trying to support herself.
"Eight Cousins" is the story of Rose Campbell, a lonely and sickly girl who has been recently orphaned and must now reside with her maiden great aunts, the matriarchs of her wealthy Boston family.
"Behind a Mask, or A Woman's Power" follows Jean Muir, the deceitful governess of the wealthy Coventry family. With expert manipulation, Jean Muir obtains the love, respect, and eventually the fortune.
"Jack and Jill" is a children's book which takes place in a small New England town after the Civil War" ...