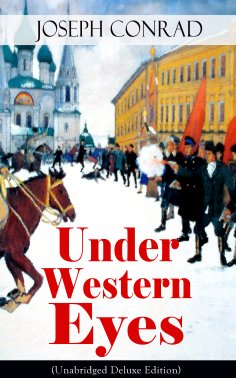 This carefully crafted ebook: "Under Western Eyes (Unabridged Deluxe Edition)" is formatted for your eReader with a functional and detailed table of contents.
Under Western Eyes (1911) is a political thriller which takes place in St. Petersburg, Russia, and Geneva, Switzerland. Mr. de P—, the brutal Minister of State, is assassinated by a team of two, but the bombs used claim the lives of his footman, the first assassin and a number of bystanders. When student Razumov enters his rooms, he finds Victor Haldin, a fellow student who informs him that he was the one who murdered Mr. de P—, but he and his accomplice did not make a proper escape plan. He requests Razumov's help...
Joseph Conrad (1857-1924), was a Polish author who wrote in English after settling in England. Conrad is regarded as one of the greatest novelists in English, though he did not speak the language fluently until he was in his twenties. He wrote stories and novels, often with a nautical setting, that depict trials of the human spirit in the midst of an indifferent universe. He was a master prose stylist who brought a distinctly non-English tragic sensibility into English literature.
Contents:
Under Western Eyes
Author's Notes on "Under Western Eyes"
Memoirs & Letters:
A Personal Record; or Some Reminiscences
The Mirror of the Sea
Notes on Life & Letters
Biography & Critical Essays:
Joseph Conrad (A Biography) by Hugh Walpole
Joseph Conrad by John Albert Macy
A Conrad Miscellany by John Albert Macy
Joseph Conrad by Virginia Woolf