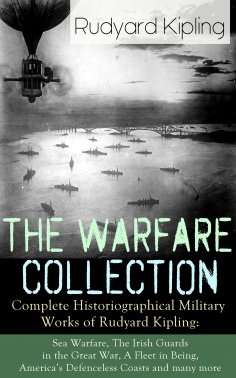 This carefully crafted ebook: "The Warfare Collection - Complete Historiographical Military Works of Rudyard Kipling: Sea Warfare, The Irish Guards in the Great War, A Fleet in Being, America's Defenceless Coasts and many more” is formatted for your eReader with a functional and detailed table of contents.
Table of Contents:
A Fleet in Being
France at War
The New Army in Training
Sea Warfare
The War in the Mountains
The Graves of the Fallen
The Irish Guards in the Great War - I
The Irish Guards in the Great War - II
The America Army
America's Defenceless Coasts
Autobiography:
Something of Myself
Joseph Rudyard Kipling (1865-1936) was an English short-story writer, poet, and novelist. He wrote tales and poems of British soldiers in India and stories for children. He is regarded as a major innovator in the art of the short story; his children's books are classics of children's literature; and one critic described his work as exhibiting "a versatile and luminous narrative gift".