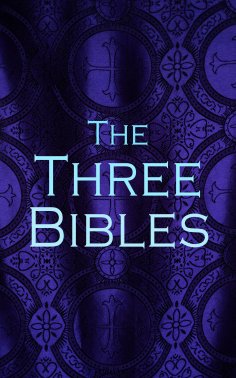 e-artnow presents to you this unique edition of 3 most influential and important English versions of the Bible:
"King James Version" is an English translation of the Christian Bible for the Church of England, commissioned in 1604 and completed in 1611 under the sponsorship of James VI and I. The books of the King James Version include the 39 books of the Old Testament, an intertestamental section containing 14 books of the Apocrypha, and the 27 books of the New Testament. James gave the translators instructions intended to ensure that the new version would conform to the ecclesiology — and reflect the episcopal structure — of the Church of England and its belief in an ordained clergy. Noted for its "majesty of style", the King James Version has been described as one of the most important books in English culture and a driving force in the shaping of the English-speaking world.
"Douay–Rheims Version" is a translation of the Bible from the Latin Vulgate into English made by members of the English College, Douai, in the service of the Catholic Church. The New Testament portion was published in Reims, France, with extensive commentary and notes, while The Old Testament portion was published by the University of Douai. Marginal notes take up the bulk of the volume and have a strong polemical and patristic character. They offered insights on issues of translation, and on the Hebrew and Greek source texts of the Vulgate.
"World English Bible" is an updated revision of the American Standard Version Bible (1901). This translation is one of the few English-language Bibles translated to be understood by most English-speakers worldwide. This version of the Bible incudes the main 66 books of the Old and New Testaments which are recognized as Scripture by all true Christians.