The Truth of Masks: a Note on Illusion (an essay of dramatic theory) 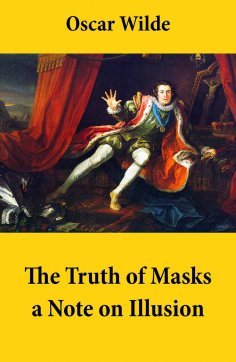 This carefully crafted ebook: "The Truth of Masks: a Note on Illusion (an essay of dramatic theory)" is formatted for your eReader with a functional and detailed table of contents. It is an essay written by Oscar Wilde, first publisched in 1886. "The Truth of Masks" speaks about the power and necessity of illusion in Shakespeare's plays and the importance of the costumes. He goes on and on about it, and then ends the essay with the following statement: "Not that I agree with everything that I have said in this essay. There is much with which I entirely disagree. The essay simply represents an artistic standpoint, and in aesthetic criticism attitude is everything. For in art there is no such thing as a universal truth. A Truth in art is that whose contradictory is also true. And just as it is only in art- criticism, and through it, that we can apprehend the Platonic theory of ideas, so it is only in art-criticism, and through it, that we can realise Hegel's system of contraries. The truths of metaphysics are the truths of masks." Oscar Wilde (1854-1900) was an Irish poet and dramatist, famous for The Importance of Being Earnest and The Picture of Dorian Gray. His controversial, open lifestyle was the reason he was charged and eventually convicted for the crime of sodomy.