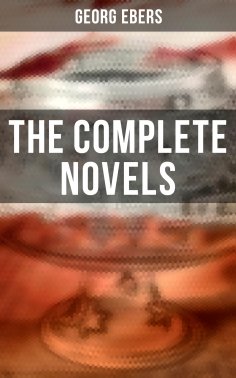 Musaicum Books presents to you this meticulously edited Georg Ebers collection, formatted to the highest digital standards and adjusted for readability on all devices.
Table of Contents:
An Egyptian Princess
Uarda: A Romance of Ancient Egypt
Homo Sum
The Sisters
The Emperor (Hadrian)
Serapis: a Romance
The Bride of the Nile
Cleopatra
Arachne
A Thorny Path (Per Aspera)
Other Novels:
The Burgomaster's Wife:A Tale of the Siege of Leyden
Margery: A Tale of Old Nuremberg
Barbara Blomberg: A Historical Romance
In the Blue Pike
A Word, Only a Word
Joshua: A Story of Biblical Times
In The Fire Of The Forge: A Romance of Old Nuremberg
A Question: The Idyll of a Picture by his Friend Alma Tadema
The Elixir
The Story of My Life, from Childhood to Manhood– Autobiography

Georg Ebers (1837-1898) was a German Egyptologist and novelist. He is best known for his discovery of the Ebers Papyrus, one of the oldest medical documents in the world. Ebers early conceived the idea of popularizing Egyptian lore by means of historical romances. His first novel, An Egyptian Princess, obtained a great success. His subsequent works of the same kind were also well received, and did much to make the public familiar with the discoveries of Egyptologists. Ebers also turned his attention to other fields of historical fiction – especially the 16th century.