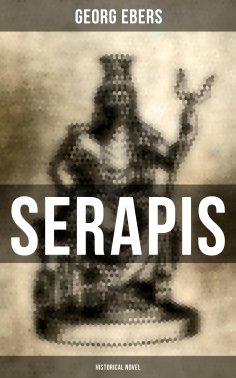 Serapis is a historical novel that features a story of the cult of Graeco-Egyptian deity that was pushed forward during the third century BC on the orders of Greek Pharaoh Ptolemy I Soter of the Ptolemaic Kingdom in Egypt as a means to unify the Greeks and Egyptians in his realm. A serapeum was any temple or religious precinct devoted to Serapis. The cult of Serapis was spread as a matter of deliberate policy by the Ptolemaic kings, who also built the immense Serapeum of Alexandria. Serapis continued to increase in popularity during the Roman Empire, often replacing Osiris as the consort of Isis in temples outside Egypt.
"As they reached the middle of the steep bridge across the canal he involuntarily stood still, riveted by the view of the southwest. In his excitement he threw up his arms, his eyes glistened with moisture and with the enthusiasm of youth, and, as was always the case when his emotions were stirred by some glorious work of God or man, an image rose to his mind, all unbidden—the image of his eldest son, now dead, but in life his closest and most sympathetic comrade. He felt as though his hand could grasp the shoulder of that son, too early snatched away, whose gifts had far transcended those of the surviving Orpheus—as though he too could gaze with him on the grand scene that lay before him."

Georg Ebers (1837-1898) was a German Egyptologist and novelist. He is best known for his discovery of the Ebers Papyrus, one of the oldest medical documents in the world. Ebers early conceived the idea of popularizing Egyptian lore by means of historical romances. His first novel, An Egyptian Princess, obtained a great success. His subsequent works of the same kind were also well received, and did much to make the public familiar with the discoveries of Egyptologists. Ebers also turned his attention to other fields of historical fiction – especially the 16th century.