The History of Italian Painting 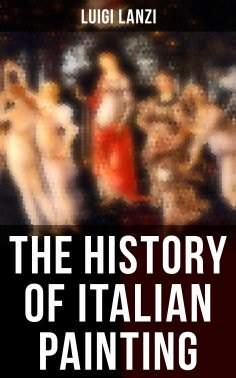 This Lanzi's work features the history of painting in Italy from the period of the revival of the fine arts to the end of the 18th century. The method that the author applies in treating of each school is as follows: he first gives a general character of each school; then he distinguishes it into three, four, or more epochs, according as its style underwent changes with the change of taste. A few celebrated painters, who have swayed the public taste, and given a new tone to the art, are placed at the head of each epoch. He has also taken notice of some arts which are analogous to painting, and though they differ from it in the materials employed, or the manner of using them, may still be included in the art; for example, engraving of prints, inlaid and mosaic work, and embroidering tapestry. The author commences by treating in the two first volumes of that part of Italy, which, through the genius of Da Vinci, Michelangelo, and Rafael, became first conspicuous, and first exhibited a decided character in painting. Those artists were the ornaments of the Florentine and Roman schools, from which he proceeds to two others, the Sienese and Neapolitan. About the same time Giorgione, Tiziano and Correggio, began to flourish in Italy; three artists, who as much advanced the art of coloring, as the former improved design; and of these luminaries of Upper Italy are treated in the third and fourth volumes. Then follows the school of Bologna, in which the attempt was made to unite the excellences of all the other schools: this commences the fifth volume; and on account of proximity it is succeeded by that of Ferrara, and Upper and Lower Romagna. The school of Genoa, which was late in acquiring celebrity, succeeds, and the book is concluded with that of Piedmont, which, though it cannot boast so long a succession of artists as those of the other states, has merits sufficient to entitle it to a place in a history of painting.

Luigi Lanzi (1732-1810) was an Italian art historian and archaeologist. He studied Italian painting and Etruscan antiquities and language. In the one field his labors are represented by his Storia Pittorica dell' Italia, the first portion of which, containing the Florentine, Sienese, Roman and Neapolitan schools, appeared in 1792, the rest in 1796. In archaeology his great achievement was Saggio di lingua Etrusca (1789), followed by Saggio delle lingue d' Italia in 1806. Among his other productions was an edition of Hesiod's Works and Days, with valuable notes, and a translation in terza rima. Begun in 1785, it was recast and completed in 1808. The list of his works closes with his Opere sacre, a series of treatises on spiritual subjects.