Tales of Louisiana Life: Bayou Folk & A Night in Acadie 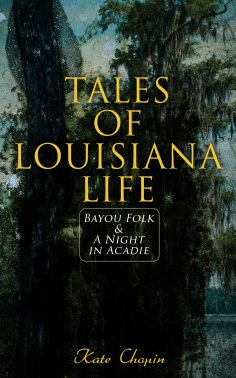 Bayou Folk and A Night in Acadie are short story collections by Louisiana Creole author Kate Chopin. Many of the stories are set in Natchitoches in north-central Louisiana. The characters in stories are usually residents of Louisiana, and many are Creoles of various ethnic or racial backgrounds.
Table of Contents:
Bayou Folk:
A No-Account Creole
In and Out of Old Natchitoches
In Sabine
A Very Fine Fiddle
Beyond the Bayou
Old Aunt Peggy
The Return of Alcibiade
A Rude Awakening
The Bênitous' Slave
Désirée's Baby
A Turkey Hunt
Madame Célestin's Divorce
Love on the Bon-Dieu
Loka
Boulôt and Boulotte
For Marse Chouchoute
A Visit to Avoyelles
A Wizard from Gettysburg
Ma'ame Pélagie
At the 'Cadian Ball
La Belle Zoraïde
A Gentleman of Bayou Têche
A Lady of Bayou St. John
A Night in Acadie:
A Night in Acadie
Athénaïse
After the Winter
Polydore
Regret
A Matter of Prejudice
Caline
A Dresden Lady in Dixie
Nég Créol
The Lilies
Azélie
Mamouche
A Sentimental Soul
Dead Men's Shoes
At Chênière Caminada
Odalie Misses Mass
Cavanelle
Tante Cat'rinette
A Respectable Woman
Ripe Figs
Ozème's Holiday

Kate Chopin (1850-1904) was an American author of short stories and novels. She is considered to have been a forerunner of the feminist authors of the 20th century of Southern or Catholic background, such as Zelda Fitzgerald. Her major works include two short story collections, Bayou Folk and A Night in Acadie, and novel The Awakening. Within a decade of her death, Chopin was widely recognized as one of the leading writers of her time.