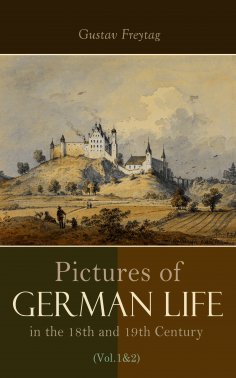 This carefully crafted e-artnow ebook "Pictures of German Life in the 18th and 19th Centuries" is formatted for your eReader with a functional and detailed table of contents.
Volume 1:
Life of the German Peasant (1240-1790):
The duration of modern nations
German agriculture in the time of the Romans, the Carlovingians, and the Hohenstauffen…
The Life of the Lower Nobility (1500-1800):
The country nobles in the sixteenth century
The court nobles
The detrimental effects of the Great War...
The German Citizen and his Shooting Festivals (1300-1800):
Gradual development of the citizen class
Decline after the Thirty Years' War...
The State Policy and the Individual (1600-1700):
The dissolution of the German Empire
The Prince's parties
The despotic official administration...
The "Stillen im Lande" or Pietists (1600-1700):
Tendencies of Protestantism till 1618
Consequences of the war
The older Pietism...
The Dawning of Light (1750):
Changes in the human mind from the invention of printing
Mathematical discipline and natural science
Law
Philosophy and its position with respect to theology...
Volume 2:
Away from the Garrison (1700):
The army, and the constitution of the State
The country militia and their history
The soldiery of the Sovereign
Change of organisation after the war...
The State of Frederic the Great (1700):
The kingdom of the Hohenzollerns
Childhood of Frederic
Opposition to his father...
Of the Year of Tuition of the German Citizen (1790):
Influence of Frederic on German art, philosophy, and historical writing
The aspect of a city in 1790
The coffee gardens and the theatres...
The Period of Ruin (1800):
The condition of Germany
Courts and cities of the Empire...
Rise of the Nation (1807-1815):
Sorrowful condition of the people in the year 1807
The first signs of rising strength
Hatred of the French Emperor
Arming of Prussia
Character and importance of the movement of 1813…
Illness and Recovery (1815-1848):
The time of reaction
Hopelessness of the German question…