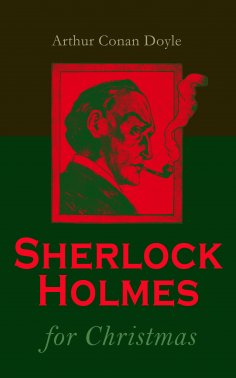 This Christmas, e-artnow presents to you the Christmas case for Sherlock Holmes. This edition includes of course as well the complete collection of all Sherlock Holmes books in one volume.
As London prepares for Christmas, newspapers report the theft of the near-priceless gemstone, the "Blue Carbuncle", from the hotel suite of the Countess of Morcar. John Horner, a plumber and a previously convicted felon, is soon arrested for the theft. Sherlock Holmes and his assistant Watson set out across the city to determine how the jewel travelled from the Countess of Morcar's hotel room to the goose's crop.
Contents:
Sherlock's Christmas Case: The Adventure of the Blue Carbuncle
A Study in Scarlet
The Sign of Four
The Hound of the Baskervilles
The Valley of Fear
A Scandal in Bohemia
The Red-Headed League
A Case of Identity
The Boscombe Valley Mystery
The Five Orange Pips
The Man with the Twisted Lip
The Speckled Band
The Engineer's Thumb
The Noble Bachelor
The Beryl Coronet
The Copper Beeches
Silver Blaze
The Yellow Face
The Stock-Broker's Clerk
The "Gloria Scott"
The Musgrave Ritual
The Reigate Puzzle
The Crooked Man
The Resident Patient
The Greek Interpreter
The Naval Treaty
The Final Problem
The Empty House
The Norwood Builder
The Dancing Men
The Solitary Cyclist
The Priory School
The Black Peter
The Adventure of Charles Augustus Milverton
The Six Napoleons
The Three Students
The Golden Pince-Nez
The Missing Three-Quarter
The Abbey Grange
The Second Stain
The Wisteria Lodge
The Red Circle
The Cardboard Box
The Bruce-Partington Plans
The Dying Detective
The Disappearance of Lady Frances Carfax
The Devil's Foot
His Last Bow: An Epilogue of Sherlock Holmes
The Illustrious Client
The Blanched Soldier
The Mazarin Stone
The Three Gables
The Sussex Vampire
The Three Garridebs
The Creeping Man
The Lion's Mane
The Veiled Lodger
The Shoscombe Old Place
The Retired Colourman
The Field Bazaar
How Watson Learned the Trick
Sherlock Holmes: A Drama in Four Act
The Crown Diamond: An Evening with Sherlock Holmes
An Intimate Study of Sherlock Holmes

Arthur Conan Doyle (1859-1930) was a British writer best known for his detective fiction featuring the character Sherlock Holmes. The Sherlock Holmes stories are generally considered milestones in the field of crime fiction. Doyle is also known for writing the fictional adventures of Professor Challenger and for propagating the mystery of the Mary Celeste.