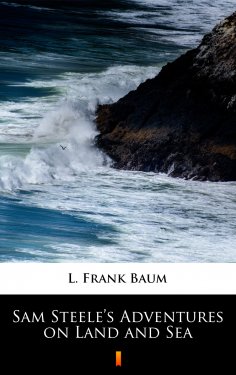 L. Frank Baum, the author of the famous „Oz” books, wrote a number of series for children (and occasionally, books for older readers) under a variety of pseudonyms. Among those you can find many examples of adventure fiction, including this, the inaugural title of the „Sam Steele” series. Sam Steele is the son of a sea captain; his father is reported killed in a shipwreck, and Sam is quickly cheated of his inheritance. Now an orphan, he meets his maternal uncle, Naboth Perkins, another sea captain and ship-owner; together the two set sail in the Pacific trade. At home again, Sam and Naboth discover that Sam’s father Captain Steele has survived shipwreck, with the loss of a leg. Re-united with his father, Sam regains his lost patrimony. Unusually for Baum, the tale of „Sam Steele’s Adventures on Land and Sea” is told in the first person, by the title character.