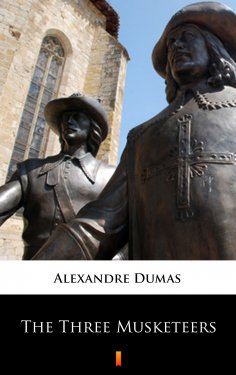 „The Three Musketeers” (French: „Les Trois Mousquetaires”) is a historical adventure novel written in 1844 by French author Alexandre Dumas. Set in 1625–1628 when France is under threat, it recounts the adventures of a young nobleman named d’Artagnan after he leaves home to travel to Paris, to join the Musketeers of the Guard. Although d’Artagnan is not able to join this elite corps immediately, he befriends the three most formidable musketeers of the age – the mysterious Athos, bumbling Porthos and ambitious and romantic Aramis who lived under the French kings Louis XIII and Louis XIV, who reigned during the 17th and early 18th centuries – and gets involved in affairs of the state and court. Together the friends must use all their guile and ingenuity to outwit the dastardly schemes of the powerful Cardinal Richelieu and the glamorous spy, Milady. With a plot that delivers stolen diamonds, masked balls, purloined letters, and, of course, great bouts of swordplay, „The Three Musketeers” is eternally entertaining!