The Life of King Philip, War Chief of the Wampanoag People 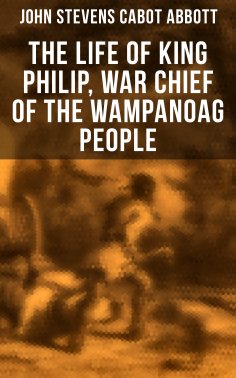 This eBook has been formatted to the highest digital standards and adjusted for readability on all devices.
Metacomet (1638–1676), also known by his adopted English name King Philip, was chief to the Wampanoag people and the second son of the sachem Massasoit. He became a chief in 1662 when his brother Wamsutta (or King Alexander) died shortly after their father Massasoit. Wamsutta's widow Weetamoo (d. 1676), sunksqua of the Pocasset, was Metacomet's ally and friend for the rest of her life. Metacomet married Weetamoo's younger sister Wootonekanuske. No one knows how many children they had or what happened to them all. Wootonekanuske and one of their sons were sold to slavery in the West Indies following the defeat of the Native Americans in what became known as King Philip's War.
Contents:
Landing of the Pilgrims
Massasoit
Clouds of Wart
The Pequot War
Commencement of the Reign of King Philip
Commencement of Hostilities
Autumn and Winter Campaigns
Captivity of Mrs. Rowlandson
The Indians Victorious
The Vicissitudes of War
Death of King Philip
Conclusion of the War