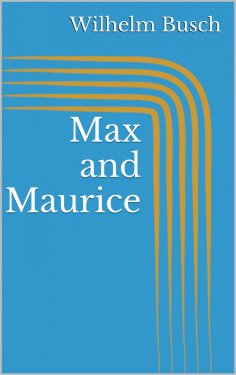 "Max and Moritz (A Story of Seven Boyish Pranks)" (original: "Max und Moritz - Eine Bubengeschichte in sieben Streichen") is a German language illustrated story in verse. This highly inventive, blackly humorous tale, told entirely in rhymed couplets, was written and illustrated by Wilhelm Busch and published in 1865. It is among the early works of Busch, nevertheless it already features many substantial, effectually aesthetic and formal regularities, procedures and basic patterns of Busch's later works. Many familiar with comic strip history consider it to have been the direct inspiration for the "Katzenjammer Kids" and "Quick & Flupke". The German title satirizes the German custom of giving a subtitle to the name of dramas in the form of "Ein Drama in ... Akten" ("A Drama of ... acts"), which became dictums in colloquial usage for any event with an unpleasant or dramatic course, e.g. "Bundespräsidentenwahl - Drama in drei Akten" ("Federal presidential Elections - Drama in Three Acts").

Heinrich Christian Wilhelm Busch (15 April 1832 – 9 January 1908) was a German humorist, poet, illustrator and painter. He published comic illustrated cautionary tales from 1859, achieving his most notable works in the 1870s. Busch's illustrations used wood engraving, and later, zincography. Busch drew on contemporary parochial and city life, satirizing Catholicism, Philistinism, strict religious morality and bigotry. His comic text was colourful and entertaining, using onomatopoeia, neologisms and other figures of speech, and led to some work being banned by the authorities.