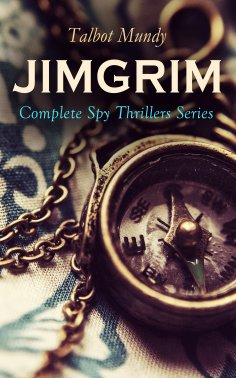 James Schuyler Grim, or "Jimgrim" is an American who had been recruited by the British intelligence services because of his in-depth knowledge of Arab life. He often travels to Middle East in order to protect British interest in that part of the world, putting himself, quite often, in a grave danger.
Table of Contents:
Jimgrim and Allah's Peace
The Iblis at Ludd
The Seventeen Thieves of El-Kalil
The Lion of Petra
The Woman Ayisha
The Lost Trooper
Affair in Araby
A Secret Society
Moses and Mrs. Aintree
The Mystery of Khufu's Tomb
Jungle Jest
The Nine Unknown
The Marriage of Meldrum Strange
The Hundred Days
OM — The Secret of Ahbor Valley
The Devil's Guard
Jimgrim (King of the World)

Talbot Mundy (1879-1940) was an English-born American writer of adventure fiction. Mundy spent his early adult years in India, East Africa and Middle East, and many of his novels and stories are set in that part of the world. He is best known as the author of King of the Khyber Rifles and the Jimgrim series.