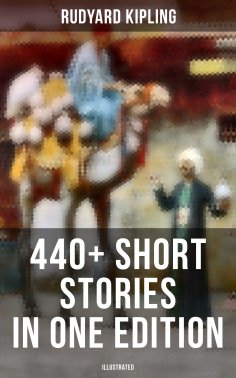 Musaicum Books presents to you this carefully created volume of "Rudyard Kipling: 440+ Short Stories in One Edition (Illustrated)". This ebook has been designed and formatted to the highest digital standards and adjusted for readability on all devices.
Short Story Collections:
The City of Dreadful Night
Plain Tales from the Hills
The Story of the Gadsbys
Soldier's Three
The Phantom
'Rickshaw and Other Ghost Stories
Under the Deodars
Wee Willie Winkie
Life's Handicap
Many Inventions
The Jungle Book
The Second Jungle Book
The Day's Work
Stalky and Co.
Just So Stories
Traffics and Discoveries
Puck of Pook's Hill
Actions and Reactions
Abaft the Funnel
Rewards and Fairies
The Eyes of Asia
A Diversity of Creatures
Land and Sea Tales
Debits and Credits
Thy Servant a Dog
Limits and Renewals
Joseph Rudyard Kipling (1865–1936) was an English short-story writer, poet, and novelist. He wrote tales and poems of British soldiers in India and stories for children. He is regarded as a major innovator in the art of the short story; his children's books are classics of children's literature; and one critic described his work as exhibiting "a versatile and luminous narrative gift".