The Complete Travelogues of Mark Twain - 5 Books in One Edition 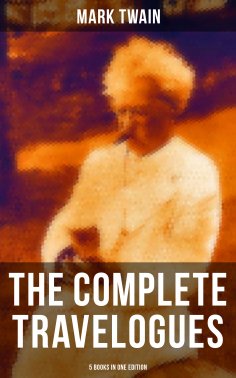 It is a complete collection of Mark Twain's travel writings – including 'The Innocents Abroad', 'Roughing It', 'A Tramp Abroad', 'Following the Equator' and 'Some Rambling Notes of an Idle Excursion' - presented in a single volume. Based on a series of letters Mark Twain wrote from Europe for San Francisco and New York newspapers as a roving correspondent, The Innocents Abroad, published in 1869, is a caricature of the sentimental travel books popular in the mid-nineteenth century. Mark Twain's fresh and humorous perspective on hallowed European landmarks lacked reverence for the past, and was as mocking about American manners as it was about European attitudes.
Mark Twain was the pen name of Samuel Clemens (1835–1910), the American author whose classic works of fiction are notable for their narrative voice, humour and social criticism.