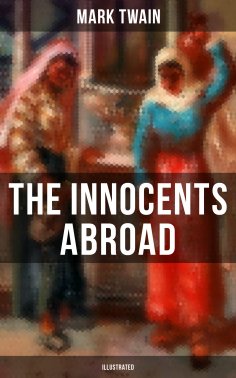 Musaicum Books presents to you this carefully created volume of "The Innocents Abroad (Illustrated)". This ebook has been designed and formatted to the highest digital standards and adjusted for readability on all devices.
Innocents Abroad is a travel book which humorously chronicles the trip Twain called his "Great Pleasure Excursion," on board the chartered vessel Quaker City through Europe and the Holy Land in 1867. The excursion was billed as a Holy Land expedition, with numerous stops and side trips along the coast of the Mediterranean Sea, such as the train excursion from Marseille to Paris for the 1867 Paris Exhibition during the reign of Napoleon III and the Second French Empire, a journey through the Papal States to Rome, a side trip through the Black Sea to Odessa, and finally culminating in an excursion through the Holy Land. Twain recorded his observations and critiques of the various aspects of culture and society which he encountered on the journey, some more serious than others. Many of his observations draw a contrast between his own experiences and the often grandiose accounts in contemporary travelogues, which were regarded in their own time as indispensable aids for traveling in the region.
Samuel Langhorne Clemens (1835-1910), better known by his pen name Mark Twain, was an American writer, humorist, entrepreneur, publisher, and lecturer. He is best known for his two novels – The Adventures of Tom Sawyer and its sequel, the Adventures of Huckleberry Finn, but his satirical stories and travel books are also widely popular. His wit and satire, in prose and in speech, earned him praise from critics and peers. He was lauded as the greatest American humorist of his age.