The Tales of the North: Jack London's Edition - 78 Short Stories in One Edition 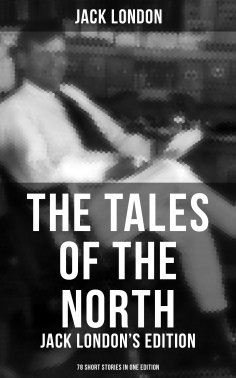 This carefully edited collection has been designed and formatted to the highest digital standards and adjusted for readability on all devices.
The Son of the Wolf:
The White Silence, The Son of the Wolf, The Men of Forty Mile, In a Far Country, To the Man on the Trail, The Priestly Prerogative, The Wisdom of the Trail, The Wife of a King, An Odyssey of the North.
The God of His Fathers:
The God of His Fathers, The Great Interrogation, Which Make Men Remember, Siwash, The Man with the Gash, Jan, the Unrepentant, Grit of Women, Where the Trail Forks, A Daughter of the Aurora, At the Rainbow's End, The Scorn of Women.
Children of the Frost:
In the Forests of the North, The Law of Life, Nam-Bok the Unveracious, The Master of Mystery, The Sunlanders, The Sickness of Lone Chief, Keesh, the Son of Keesh, The Death of Ligoun, Li Wan, the Fair, The League of the Old Men.
The Faith of Men:
A Relic of the Pliocene, A Hyperborean Brew, The Faith of Men, Too Much Gold, The One Thousand Dozen, The Marriage of Lit-lit, Bâtard, The Story of Jees Uck.
Love of Life & Other Stories:
Love of Life, A Day's Lodging, The White Man's Way, The Story of Keesh, The Unexpected, Brown Wolf, The Sun Dog Trail, Negore, The Coward.
Lost Face:
Lost Face, Trust, To Build a Fire, That Spot, Flush of Gold, The Passing of Marcus O'Brien, The Wit of Porportuk.
Smoke Bellew:
The Taste of the Meat, The Meat, The Stampede to Squaw Creek, Shorty Dreams, The Man on the Other Bank, The Race for Number Three.
+ 19 Uncollected Stories:
The Devil's Dice Box, The Test: A Clondyke Wooing, Even Unto Death, The King of Mazy May, Pluck and Pertinacity, A Northland Miracle, Thanksgiving on Slav Creek, The "Fuzziness" of Hoockla-Heen, The League of Old Men, To Build a Fire, Up the Slide...
Jack London is best known as the author of The Call of the Wild and White Fang, both set in the Klondike Gold Rush.