FATHER BROWN Complete Series - All 51 Short Stories in One Edition 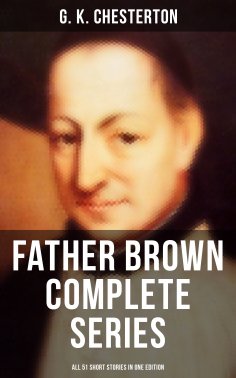 Father Brown is a fictional character created by English novelist G. K. Chesterton, who stars in 51 detective short stories, most of which were later compiled in five books. Chesterton based the character on Father John O'Connor, a parish priest in Bradford who was involved in Chesterton's conversion to Catholicism. The relationship was recorded by O'Connor in his 1937 book Father Brown on Chesterton.
This omnibus contains the following books:
1. The Innocence of Father Brown
2. The Wisdom of Father Brown
3. The Incredulity of Father Brown
4. The Secret of Father Brown
5. The Scandal of Father Brown
Gilbert Keith Chesterton (1874 – 1936) was an English writer, lay theologian, poet, dramatist, journalist, orator, literary and art critic, biographer, and Christian apologist. Chesterton is often referred to as the "prince of paradox".