The Prince and the Pauper (Illustrated Children's Classic) 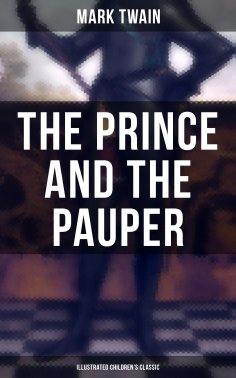 This eBook edition of "The Prince and the Pauper (Illustrated Children's Classic)" has been formatted to the highest digital standards and adjusted for readability on all devices.
Set in 1547, The Prince and the Pauper tells the story of two young boys who are identical in appearance: Tom Canty, a pauper who lives with his abusive father in Offal Court off Pudding Lane in London, and Prince Edward, son of King Henry VIII. Tom, the youngest boy in a poor family living in London, has always aspired to a better life, encouraged by the local priest. Loitering around the palace gates one day, he sees the Prince Edward of Wales. Tom is nearly caught and beaten by the Royal Guards, but Edward stops them and invites Tom into his palace chamber. There the two boys get to know one another, fascinated by each other's life and their uncanny resemblance. They decide to switch clothes "temporarily". The Prince momentarily goes outside, quickly hiding an article of national importance (the Great Seal of England), and eventually finding his way to the Canty home. Tom, posing as the prince, tries to cope with court customs and manners. His fellow nobles and palace staff think "the prince" has an illness which has caused memory loss and fear he will go mad. They repeatedly ask him about the missing "Great Seal", but he knows nothing about it.
Samuel Langhorne Clemens (1835-1910), better known by his pen name Mark Twain, was an American writer, humorist, entrepreneur, publisher, and lecturer. He is best known for his two novels – The Adventures of Tom Sawyer and its sequel, the Adventures of Huckleberry Finn, but his satirical stories and travel books are also widely popular. His wit and satire, in prose and in speech, earned him praise from critics and peers. He was lauded as the greatest American humorist of his age.