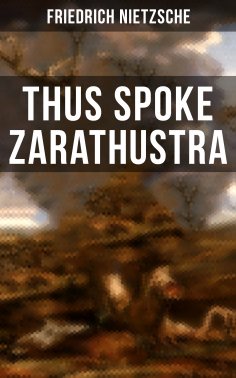 Thus Spoke Zarathustra (subtitled as A Book for All and None) chronicles the fictitious travels and speeches of Zarathustra, the founder of Zoroastrianism. While Nietzsche injects myriad ideas into the book, a few recurring themes stand out. The overman (Übermensch), a self-mastered individual who has achieved his full power, is an almost omnipresent idea in Thus Spoke Zarathustra. Man as a race is merely a bridge between animals and the overman. Nietzsche also makes a point that the overman is not an end result for a person, but more the journey toward self-mastery.
Friedrich Nietzsche (1844–1900) was a German philosopher, poet, and Latin and Greek scholar whose work has exerted a profound influence on Western philosophy and modern intellectual history. Because of Nietzsche's evocative style and provocative ideas, his philosophy generates passionate reactions. His works remain controversial, due to varying interpretations and misinterpretations of his work. In the Western philosophy tradition, Nietzsche's writings have been described as the unique case of free revolutionary thought, that is, revolutionary in its structure and problems, although not tied to any revolutionary project.