THE MONASTERY & THE ABBOT (Illustrated Edition) 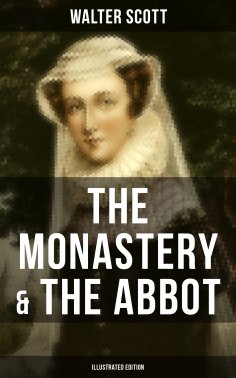 "The Monastery: A Romance" is one of Scott's Tales from Benedictine Sources and is set in the time of Mary, Queen of Scots, and the Elizabethan period. The action is centered on the Monastery of Kennaquhair, probably based on Melrose Abbey in south east Scotland, on the River Tweed. At this time, circa 1550, the Scottish Reformation is just beginning, and the monastery is in peril. A love story is interwoven as the Glendinning boys fall in love with Mary Avenel. Edward ends up becoming a monk, and Halbert finally marries Mary, after service with the Earl of Murray.
"The Abbot" is the second of Scott's Tales from Benedictine Sources and a sequel to "The Monastery". The story follows the fortunes of certain characters Scott introduced in The Monastery, but it also introduces new characters such as Roland Graeme. It is concerned mainly with Queen Mary's imprisonment at Loch Leven Castle in 1567, her escape, and her defeat. Parallel to this is the romance of Roland Graeme, a dim-witted but spirited youth. He is brought up at the castle of Avenel by Mary Avenel and her husband, Halbert Glendinning. Roland is sent by the Regent Murray to be page to Mary Stuart with directions to guard her. He falls in love with Catherine Seyton, who is one of the ladies-in-waiting to the queen. He is found later to be the heir to Avenel. Edward Glendinning, the brother of Halbert, is the abbot of the title, the last abbot of the monastery described in the preceding novel.
Sir Walter Scott (1771-1832) was a Scottish historical novelist, playwright and poet.