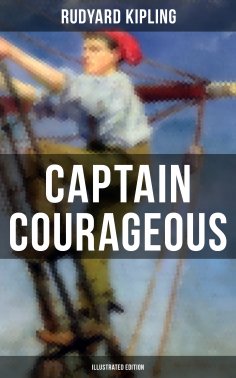 This beautifully illustrated eBook edition of "Captain Courageous" has been formatted to the highest digital standards and adjusted for readability on all devices.
Captains Courageous is an adventure novel. The book's title comes from the ballad "Mary Ambree", which starts, "When captains courageous, whom death could not daunt". Protagonist Harvey Cheyne, Jr., is the son of a wealthy railroad magnate and his wife, in San Diego, California. Washed overboard from a transatlantic steamship and rescued by fishermen off the Grand Banks of Newfoundland, Harvey can neither persuade them to take him quickly to port, nor convince them of his wealth. Disko Troop, captain of the schooner We're Here, offers him temporary membership in the crew until they return to port, and Harvey later accepts.
Rudyard Kipling (1865-1936) was an English short-story writer, poet, and novelist. He wrote tales and poems of British soldiers in India and stories for children. He is regarded as a major innovator in the art of the short story; his children's books are classics of children's literature; and one critic described his work as exhibiting "a versatile and luminous narrative gift".