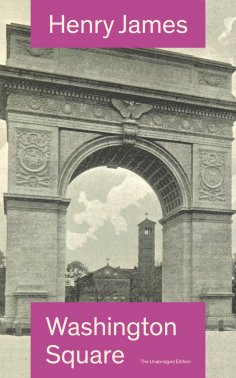 This carefully crafted ebook: "Washington Square (The Unabridged Edition)" is formatted for your eReader with a functional and detailed table of contents. Washington Square is a tragicomedy that recounts the conflict between a dull but sweet daughter and her brilliant, unemotional father. The plot of the novel is based upon a true story told to James by his close friend, British actress Fanny Kemble. The book is often compared with Jane Austen's work for the clarity and grace of its prose and its intense focus on family relationships. Dr. Austin Sloper, a wealthy and highly successful physician, lives in Washington Square, New York with his daughter Catherine. Catherine is a sweet-natured young woman who is a great disappointment to her father, being physically plain and, he believes, dull in terms of personality and intellect. His sister, Lavinia Penniman, a meddlesome woman with a weakness for romance and melodrama, is the only other member of the doctor's household. Henry James (1843–1916) was an American-British writer who spent most of his writing career in Britain. He is regarded as one of the key figures of 19th-century literary realism.