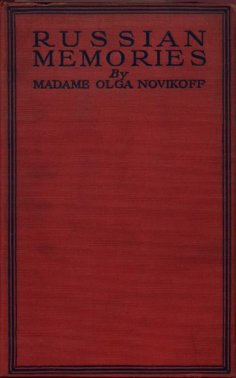 It is perhaps a little superfluous for one of my years to write an introduction for one so well known and so much esteemed and admired as Madame Novikoff. And yet it may seem just, if it does not seem vain, that a full-hearted tribute should come to her from this generation which profits by the result of her life and her work—the great new friendship between England and Russia.

She is one of the most interesting women in European diplomatic circles. She is a picturesque personality, but more than that she is one who has really done a great deal in her life. You cannot say of her, as of so many brilliant women, "She was born, she was admired, she passed!" Destiny used her to accomplish great ends.

For many in our society life, she stood for Russia, was Russia. For the poor people of England Russia was represented by the filth of the Ghetto and the crimes of the so-called "political" refugees; for the middle classes who read Seton Merriman, Russia was a fantastic country of revolutionaries and bloodthirsty police; but fortunately the ruling and upper classes always have had some better vision, they have had the means of travel, they have seen real representative Russians in their midst. {2} "They are barbarians, these Russians!" says someone to his friend. But the friend turns a deaf ear. "I happen to know one of them," says he.

A beautiful and clever woman always charms, whatever her nationality may be, and it is possible for her to make conquests that predicate nothing of the nation to which she belongs. That is true, and therein lay the true grace and genius of Madame Novikoff. She was not merely a clever and charming woman, she was Russia herself. Russia lent her charm. Thus her friends were drawn from serious and vital England.

Gladstone learned from her what Russia was.