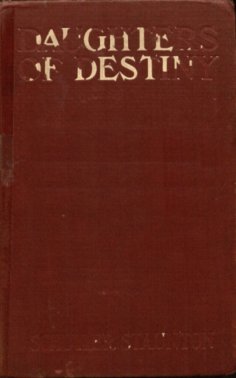 Daughters of Destiny is a 1906 adventure novel written by L. Frank Baum, famous as the author of the Oz books. Baum published the novel under the pen name "Schuyler Staunton," one of his several pseudonyms. Baum arrived at the name by adding one letter to the name of his late maternal uncle, Schuyler Stanton: The American Construction Syndicate wants to build a railroad across Baluchistan, as part of their plans for global development. The company appoints a commission, headed by Colonel Piedmont Moore, to obtain the right of way from the Baluchi ruler. Moore chooses his personal friend and physician Dr. Warner as his second in command; and with commendable nepotism he selects his son Allison Moore as the commission's surveyor. Dr. Warner's ebullient daughter Bessie wants to come along, and solicits Moore's daughter Janet to come too; the young women will by chaperoned by Bessie's Aunt Lucy. (Col. Moore is secretly pleased that his daughter Janet will make the trip; she has been melancholy after an unhappy love affair, with a man the Colonel regards as a thief and scoundrel.)

The Americans travel to Baluchistan, and promptly get themselves imbroiled in a succession conflict. The reigning Khan of the country is dying, and two cousins vie for the crown. One, Kasam, is masquerading as their guide. What follows is a complex but tightly-woven plot that involves subterfuge and conspiracy, poisonings and attempted assassinations, sword fights and a pursuit in the desert, a scheming femme fatale, disguises and false identities – all the ingredients of melodrama.