The Humanness of Women: Theory and Practice of Feminism (Studies and Thoughts) 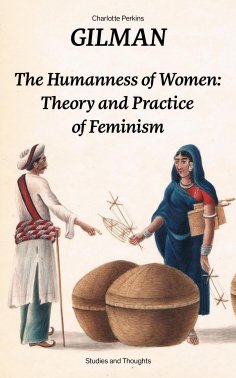 This carefully crafted ebook: "The Humanness of Women: Theory and Practice of Feminism (Studies and Thoughts)" is formatted for your eReader with a functional and detailed table of contents. Charlotte Perkins Gilman (1860–1935) was a prominent American feminist, sociologist, novelist, writer of short stories, poetry, and nonfiction, and a lecturer for social reform. She was a utopian feminist during a time when her accomplishments were exceptional for women, and she served as a role model for future generations of feminists because of her unorthodox concepts and lifestyle. Her best remembered work today is her semi-autobiographical short story "The Yellow Wallpaper" which she wrote after a severe bout of postpartum psychosis. Women and Economics – A Study of the Economic Relation Between Men and Women as a Factor in Social Evolution is a book written by Charlotte Perkins Gilman and published in 1898. It is considered by many to be her single greatest work, and as with much of Gilman's writing, the book touched a few dominant themes: the transformation of marriage, the family, and the home, with her central argument: "the economic independence and specialization of women as essential to the improvement of marriage, motherhood, domestic industry, and racial improvement. Table of Contents: Women and Economics The Home: Its Works and Influence The Humanness of Women The Beauty Women Have Lost Woman and The State Women Teachers, Married and Unmarried Our Overworked Instincts Her Pets Private Morality and Public Immorality The New Motherhood The Nun in The Kitchen Kitchen-Mindedness Parlor-Mindedness Nursery-Mindedness