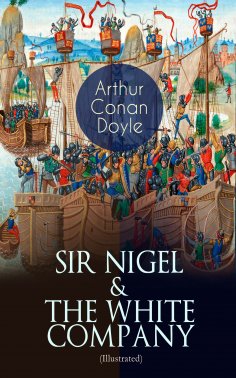 Sir Nigel is set during the early phase of the Hundred Years' War, spanning the years 1350 to 1356. It describes the early life of that book's hero Nigel Loring, a knight in the service of King Edward III in the first phase of the Hundred Years' War. The tale traces the fortunes of the family of Loring of the Manor of Tilford in Surrey, many of whose scions had been prominent in the service of the Norman and Angevin Kings of England, against the backdrop of the Black Death.
The White Company is set in England, France, and Spain, in the years 1366 and 1367, against the background of the campaign of Edward, the Black Prince to restore Peter of Castile to the throne of the Kingdom of Castile. At the age of twenty, young Alleyne leaves the Catholic abbey where he has been raised, and goes out to see the world, in accordance with the terms of his father's will. He meets veteran archer Sam Aylward, a recruiter who has returned to England, and joins the White Company of mercenaries under command of Sir Nigel Loring.
Arthur Conan Doyle (1859-1930) was a British writer best known for his detective fiction featuring the character Sherlock Holmes. The Sherlock Holmes stories are generally considered milestones in the field of crime fiction. Doyle is also known for writing the fictional adventures of Professor Challenger and for propagating the mystery of the Mary Celeste. He was a prolific writer whose other works include fantasy and science fiction stories, plays, romances, poetry, non-fiction and historical novels.