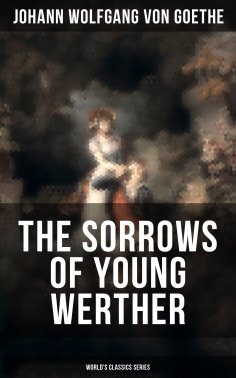 The Sorrows of Young Werther is a Europian literature classic. This autobiographical novel by Goethe, is presented mostly as a collection of letters written by Werther, a young artist of a sensitive and passionate temperament, to his friend Wilhelm. These give an intimate account of his stay in the fictional village of Wahlheim whose peasants have enchanted him with their simple ways. Werther meets Charlotte, a beautiful young girl who takes care of her siblings after the death of their mother, and falls in love with her although knowing beforehand that she is engaged. Despite the pain it causes him, Werther keeps spending time with Charlotte, but his pain eventually becomes so great that he is forced to leave. After a short absence, he comes back to find Charlotte married, and his agony becomes a threat. Johann Wolfgang von Goethe (1749-1832) was a German writer and statesman, best known for his tragic play, Faust. His body of work includes epic and lyric poetry written in a variety of meters and styles, prose and verse dramas, memoirs, literary and aesthetic criticism, novels, numerous literary and scientific fragments and many more. A literary celebrity by the age of 25, Goethe was ennobled by the Duke of Saxe-Weimar, Karl August, following the success of his first novel, The Sorrows of Young Werther. He was also an early participant in the Sturm und Drang literary movement.