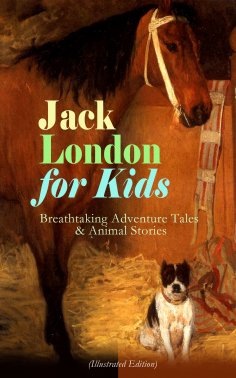 This carefully crafted ebook: "Jack London for Kids – Breathtaking Adventure Tales & Animal Stories (Illustrated Edition)" is formatted for your eReader with a functional and detailed table of contents:
The Cruise of the Dazzler – Joe Bronson, dissatisfied with his dull life at school, runs away and joins the crew of a sloop he sees in San Francisco Bay.
The Call of the Wild – A dog named Buck gets stolen from his home and sold into service as a sled dog in Alaska. He becomes progressively feral in the harsh environment, where he is forced to fight to survive and dominate other dogs.
White Fang – A wolf-dog raised in an Indian camp runs away only to face the violent world of wild animals and the equally violent world of humans.
Jerry of the Islands: A True Dog Story – Jerry is an Irish terrier who finds himself on the island of Malaita, after the ship he was on got attacked. Jerry is accepted by the local tribe, but when the tribe's sorcerer decides to sacrifice him, he manages to avoid it and his adventure begins.
Michael, Brother of Jerry – Michael, an Irish terrier, was born and raised in the Solomon Islands. Working as a slave hunter aboard a schooner, Michael is accidentally left on the beach, and his journey around the world begins with the new owner.
Before Adam is the story of a man who dreams he lives the life of an early hominid Australopithecine. His hominid alter ego belongs to Cave People, and we also meet the more advanced Fire People, and the more animal-like Tree People.
Jack London (1876-1916) was an American novelist, journalist, and social activist. His amazing life experience also includes being an oyster pirate, railroad hobo, gold prospector, sailor, war correspondent and much more. He wrote adventure novels & sea tales, stories of the Gold Rush, tales of the South Pacific and the San Francisco Bay area - most of which were based on or inspired by his own life experiences.