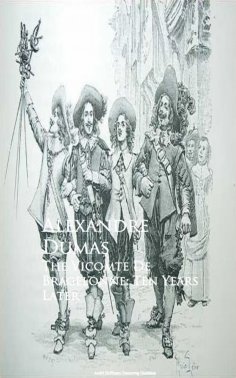 The principal heroes of the novel are the musketeers. The novel's length finds it frequently broken into smaller parts. The narrative is set between 1660 and 1673 against the background of the transformation of Louis XIV from child monarch to Sun King: The Vicomte of Bragelonne: Ten Years Later is the third and last of the d'Artagnan Romances, following The Three Musketeers and Twenty Years After. It appeared first in serial form between 1847 and 1850. In the English translations, the 268 chapters of this large volume are usually subdivided into three, but sometimes four or even five individual books. In three-volume English editions the volumes are entitled The Vicomte de Bragelonne, Louise de la Vallière, and The Man in the Iron Mask. Each volume is roughly the length of the original The Three Musketeers. In four-volume editions volume names remain except that Louise de la Vallière and The Man in the Iron Mask move from second and third volumes to third and fourth, with Ten Years Later becoming the second volume. There are usually no volume-specific names in five-volume editions.