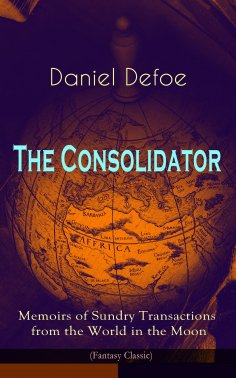 This carefully crafted ebook: "The Consolidator - Memoirs of Sundry Transactions from the World in the Moon (Fantasy Classic)" is formatted for your eReader with a functional and detailed table of contents.
The Consolidator or, Memoirs of Sundry Transactions from the World in the Moon is a satirical novel that mixes fantasy with political and social satire. The narrator travels to the moon mostly to get a dispassionate and crushingly granular view of recent and contemporary British political history. The consolidator is a mean of transport that is used to get to the moon – a chariot with two feathered winged creatures, each of them representing the houses of parliament.
Daniel Defoe (1660-1731), born Daniel Foe, was an English trader, writer, journalist, pamphleteer, and spy, most famous for his novel Robinson Crusoe. Defoe is noted for being one of the earliest proponents of the novel, as he helped to popularize the form in Britain with others such as Samuel Richardson, and is among the founders of the English novel. He was a prolific and versatile writer, producing more than five hundred books, pamphlets, and journals on various topics, including politics, crime, religion, marriage, psychology, and the supernatural.