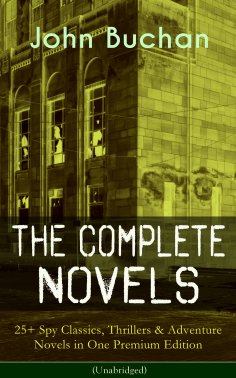 This carefully crafted ebook: "The Complete Novels of John Buchan: 25+ Spy Classics, Thrillers & Adventure Novels in One Premium Edition (Unabridged)" is formatted for your eReader with a functional and detailed table of contents:
Richard Hannay Series
The Thirty-Nine Steps
Greenmantle
Mr Standfast
The Three Hostages
The Island of Sheep, or The Man from the Norlands
Dickson McCunn and the 'Gorbals Die-hards' Series
Huntingtower
Castle Gay
The House of the Four Winds
Sir Edward Leithen Series
The Power-House
John Macnab
The Dancing Floor, or The Goddess from the Shades
The Gap in the Curtain
Sick Heart River, or Mountain Meadow
Other Novels
Sir Quixote of the Moors
John Burnet of Barns
A Lost Lady of Old Years
The Half-Hearted
A Lodge in the Wilderness
Prester John
Salute to Adventurers
The Path of the King
Midwinter
Witch Wood
The Blanket of the Dark
A Prince of the Captivity
The Free Fishers
The Magic Walking Stick
The Courts of the Morning
Autobiography & Biography of John Buchan
Memory Hold-the-door (Autobiography)
Unforgettable, Unforgotten by Anna M. Buchan
John Buchan (1875-1940) was a Scottish novelist and historian and also served as Canada's Governor General. His 100 works include nearly thirty novels, seven collections of short stories and biographies. But, the most famous of his books were the adventure and spy thrillers, most notably The Thirty-Nine Steps, and it is for these that he is now best remembered.