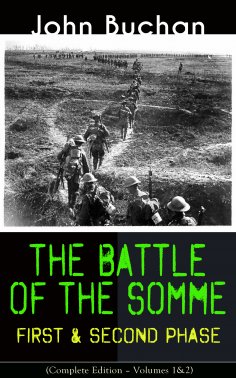 This carefully crafted ebook: "THE BATTLE OF THE SOMME – First & Second Phase (Complete Edition – Volumes 1&2)" is formatted for your eReader with a functional and detailed table of contents.
John Buchan (1875-1940) was a Scottish novelist and historian and also served as Canada's Governor General. With the outbreak of the First World War, Buchan worked as a correspondent in France for The Times.
The Battle of the Somme, also known as the Somme Offensive, was a battle of the First World War fought by the armies of the British and French empires against the German Empire. It took place between 1 July and 18 November 1916 on both sides of the River Somme in France. It was one of the largest battles of World War I, in which more than 1,000,000 men were wounded or killed, making it one of the bloodiest battles in human history. The battle is notable for the importance of air power and the first use of the tank. At the end of the battle, British and French forces had penetrated 6 miles (9.7 km) into German-occupied territory, taking more ground than any offensive since the Battle of the Marne in 1914.