Days to Remember: The British Empire in the Great War (Illustrated) 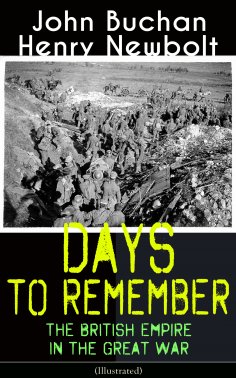 This carefully crafted ebook: "Days to Remember: The British Empire in the Great War (Illustrated)" is formatted for your eReader with a functional and detailed table of contents.
"It is never easy to fix upon one cause as the origin of a great war, and the war of 1914 was the outcome of several causes combined. For twenty years there had been growing up in Europe a sense of insecurity; the great Powers had become restless and suspicious of one another . . ." (Excerpt)
The British Army during World War I fought the largest and most costly war in its long history. Unlike the French and German Armies, its units were made up exclusively of volunteers—as opposed to conscripts—at the beginning of the conflict. Furthermore, the British Army was considerably smaller than its French and German counterparts. Yet the army showed exemplary valour and courage on the battlefield. Buchan and Newbolt bring their expert analysis into their overview of the Great War and the reasons for it.
John Buchan (1875-1940) was a Scottish novelist, historian and also served as Canada's Governor General. With the outbreak of the First World War, Buchan worked as a correspondent in France for The Times.
Sir Henry John Newbolt (1862–1938) was an English poet, novelist and historian. He also had a very powerful role as a government adviser. He is perhaps best remembered for his poems "Vitaï Lampada" and "Drake's Drum".