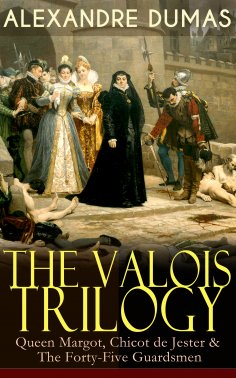 This carefully crafted ebook: "THE VALOIS TRILOGY: Queen Margot, Chicot de Jester & The Forty-Five Guardsmen" is formatted for your eReader with a functional and detailed table of contents.
The Valois Trilogy covers the historical context of French Wars of Religion, during the Valois dynasty. The trilogy contains novels Marguerite de Valois (The Reine Margot), Chicot de Jester (La Dame de Monsoreau) and The Forty-Five Guardsmen.
Marguerite de Valois or La Reine Margot is a historical novel set in Paris in August 1572 during the reign of Charles IX. The novel's protagonist is Marguerite de Valois, better known as Margot, daughter of the deceased Henry II and the infamous scheming Catholic power player Catherine de Medici.
Chicot de Jester or La Dame de Monsoreau is concerned with fraternal royal strife at the court of Henri III. Tragically caught between the millstones of history are the gallant Count de Bussy and the woman he adores, la Dame de Monsoreau. The action takes place between February and September 1578, six years after the massacre of St. Bartholomew with which La Reine Margot begins.
The Forty-Five Guardsmen is the third and final novel of the trilogy of Valois. The action takes place between 1585 and 1586, thirteen years after the massacre of St. Bartholomew. Having succeeded his brother Charles IX, Henry III reigned for ten years without being able to calm the political and religious agitation that delivers the kingdom to factions.
Alexandre Dumas, père (1802-1870) was a French writer whose works have been translated into nearly 100 languages and he is one of the most widely read French authors. His most famous works are The Count of Monte Cristo and The Three Musketeers.