The Adventures of Oliver Twist: Unabridged with the Original Illustrations by George Cruikshank 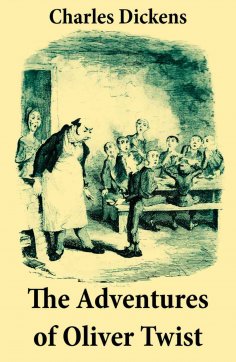 This carefully crafted ebook: "The Adventures of Oliver Twist (Unabridged with the Original Illustrations by George Cruikshank)" is formatted for your eReader with a functional and detailed table of contents. The Adventures of Oliver Twist, first published in 1838, is a story written by Charles Dickens. Orphaned at birth, Oliver Twist grows up under the loveless, relentless watch of a workhouse. He runs away with hopes for a better life in London and finds himself taken under the wing of the Artful Dodger and caught up with a group of pickpockets, headed by Fagin. As he tries to free himself from their clutches he becomes immersed in the seedy underbelly of the Capital, amongst criminals, prostitutes and the homeless. He is rescued by Mr. Brownlow but the gang kidnap him back. But Oliver discovers the identity of his parents and the gang is exposed. Charles John Huffam Dickens ( 1812 – 1870) was an English writer and social critic. He created some of the world's most memorable fictional characters and is generally regarded as the greatest novelist of the Victorian period. During his life, his works enjoyed unprecedented fame, and by the twentieth century his literary genius was broadly acknowledged by critics and scholars. His novels and short stories continue to be widely popular.