The Complete Plays: The Importance Of Being Earnest + Salome + A Woman Of No Importance + Lady Winde 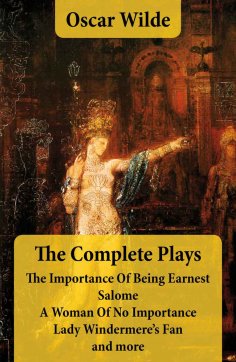 This carefully crafted ebook: "The Complete Plays: The Importance Of Being Earnest + Salome + A Woman Of No Importance + Lady Windermere's Fan and more" is formatted for your eReader with a functional and detailed table of contents. Oscar Wilde wrote nine plays in all between 1879 and 1894. His fame as a dramatist rests on four comedies, Lady Windermere's Fan, A Woman of No Importance, An Ideal Husband, The Importance of Being Earnest and the tragedy Salomé. His plays continue to dazzle audiences even a century after his death. Table of Contents: Vera The Duchess Of Padua Lady Windermere's Fan A Woman Of No Importance Salomé Salome (English Version) An Ideal Husband The Importance Of Being Earnest La Sainte Courtisane A Florentine Tragedy Oscar Wilde (1854 – 1900) was an Anglo-Irish playwright, novelist, poet, and critic. He is regarded as one of the greatest playwrights of the Victorian Era. In his lifetime he wrote nine plays, one novel, and numerous poems, short stories, and essays. Wilde was a proponent of the Aesthetic movement, which emphasized aesthetic values more than moral or social themes. This doctrine is most clearly summarized in the phrase 'art for art's sake'.