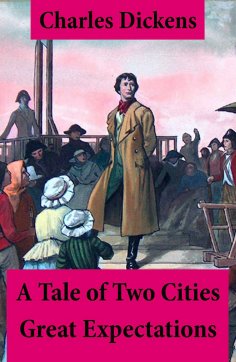 This carefully crafted ebook: "A Tale of Two Cities + Great Expectations (2 Unabridged Classics)" is formatted for your eReader with a functional and detailed table of contents. A Tale of Two Cities and Great Expectations are two much-loved novels by Charles Dickens. Tale of Two Cities is is a novel set in London and Paris before and during the French Revolution. The main characters — Doctor Alexandre Manette, Charles Darnay, and Sydney Carton — are all recalled to life, or resurrected, in different ways as turmoil erupts. Great Expectations centers around a poor young man by the name of Pip, who is given the chance to make himself a gentleman by a mysterious benefactor. Great Expectations offers a fascinating view of the differences between classes during the Victorian era, as well as a great sense of comedy and pathos. Charles John Huffam Dickens ( 1812 – 1870) was an English writer and social critic. He created some of the world's most memorable fictional characters and is generally regarded as the greatest novelist of the Victorian period. During his life, his works enjoyed unprecedented fame, and by the twentieth century his literary genius was broadly acknowledged by critics and scholars. His novels and short stories continue to be widely popular.