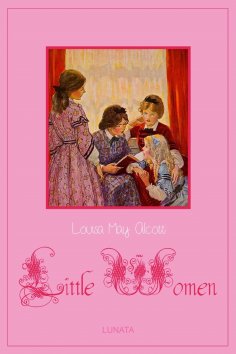 Little Women: The Original Classic Novel. The story of the lives of the four March sisters—Meg, Jo, Beth, and Amy. The sisters and their mother, whom they call Marmee, live in a new neighborhood . Having lost all his money, their father is serving as a chaplain in the American Civil War, far from home. Meg and Jo must work to support the family: Meg tutors a nearby family of four children; Jo assists her aged great-aunt March, a wealthy widow living in a mansion, Plumfield. The perfect introduction to Lousia May’s Alcott’s classic tale and a must-have keepsake for fans of the film.

Louisa May Alcott (November 29, 1832 – March 6, 1888) was an American novelist, short story writer and poet best known as the author of the novel "Little Women" and its sequels "Little Men" "and "Jo's Boys" Raised in New England by her transcendentalist parents, Abigail May and Amos Bronson Alcott, she grew up among many of the well-known intellectuals of the day, such as Ralph Waldo Emerson, Nathaniel Hawthorne, Henry David Thoreau, and Henry Wadsworth Longfellow. She began to receive critical success for her writing in the 1860s. Early in her career, she sometimes used pen names such as A. M. Barnard, under which she wrote lurid short stories and sensation novels for adults that focused on passion and revenge.